Notre Dame and UConn faced off in the 2014 championship, so this year was the rematch. Last year UConn won by 19 points.

Spirit was high before the game, with each team’s fans cheering loudly when their band played and when the players came on court to warm up.

Once the game started, Notre Dame jumped out to an early lead:

But UConn fought back and was up at half time: 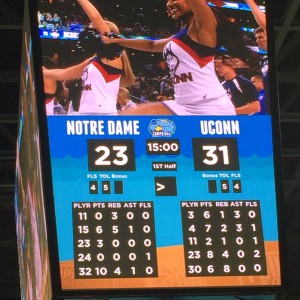 The second half was filled with drama. UConn would pull ahead by 10, then Notre Dame would go on a run and cut the lead to 5, but the Huskies players stepped up and built the lead back up to 10.

Finally, though, the game produced the same result as last year, although by a smaller margin. UConn won its third consecutive championship.

As this post goes live, we will be at the airport preparing for the long flight home. From the maps in the airline magazine on the plane, my husband figured that the trip between Seattle and Tampa is probably the second longest flight one can take from one major city in the United States to another. (Seattle-Miami would be a little longer.)

It was an enjoyable quick trip, but we’ll be glad to get back to the Pacific Northwest. A temperature of 88 degrees F. is one reason we left St. Louis. And although there’s a lot of water around Tampa, there are no mountains. And I miss my mountain: