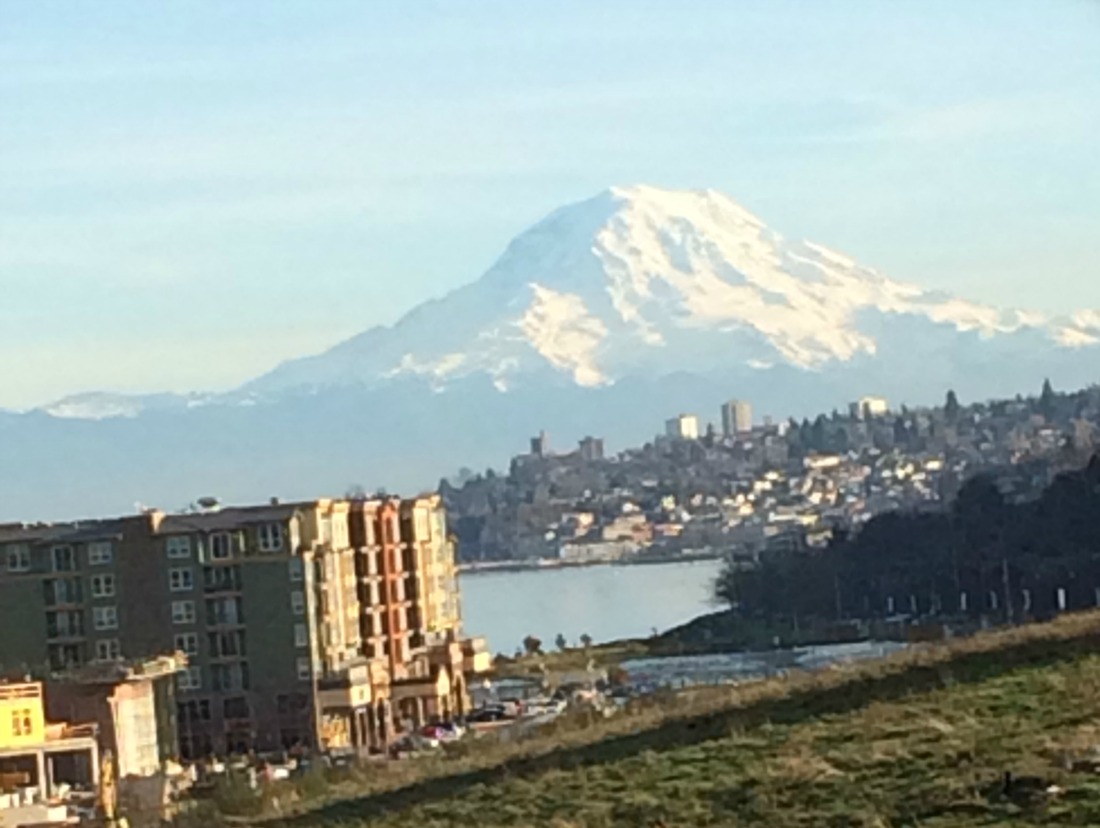 I have absolutely zero interest in the sport of golf. But the U.S. Open is being held at Chambers Bay, which is just a hop, skip, and a jump from our new hometown of Tacoma, WA. So I tuned in to Fox this afternoon to see if the Goodyear blimp (which we’ve seen, as a far-off speck in the sky, circling for the last couple of days) would provide some shots of our beautiful local scenery.

And it certainly did. The weather here has been clear and just gorgeous all four days of the tournament. The blimp caught postcard-perfect shots of Mount Rainier, Puget Sound, and the Tacoma Narrows Bridge. But what surprised both my husband F. and me was that, between the gorgeous scenery shots, we got caught up in the tournament drama.

Even though I don’t follow golf, I am interested in other sports, notably baseball, basketball, NFL football (which you are required to like when you move to the Seattle-Tacoma area), and tennis. But I’m not much into personalities and statistics. Even though baseball is my first love and I watch the World Series faithfully every year, no matter who’s playing, sometimes, come January, I’ve forgotten who won.

What I like is watching games. I love the way games unfold and the way players react to and cope with changing situations. This is why I prefer National League baseball to American League play: because the AL use of the designated hitter means that managers don’t have to make key decisions about whether to pinch hit for a pitcher who’s working well to take advantage of a potential scoring situation. I love to see which players step up in clutch moments and which ones choke, which athletes are able to recognize and adapt to what their opponents are doing and which ones stubbornly keep doing what they’re doing and hoping for different results. I love the pressure of the moment, the opportunity to step up or shut down.

And the final round of this year’s U.S. Open golf tournament provided some of the best sports drama I’ve seen in a long time:

I admit that I can’t putt either—or I assume I can’t; I’ve never tried—but that’s why these guys were at Chambers Bay while I was watching on TV in my living room just a few miles away. But even though we got caught up in the drama, I don’t anticipate watching too many more golf tournaments—unless the U.S. Open comes back to Chambers Bay one day.

One thought on “U.S. Open: We Tuned in for the Scenery But Stayed for the Drama”