After more than half a century advocating for women’s rights and other civil liberties, Gloria Steinem has become one of the most famous feminists of all time. While you might know her best as the face of the women’s liberation movement or the founder of Ms. magazine, the Ohio-born activist has quite a few other accomplishments to her name.

Those of us who grew up along with Gloria Steinem probably know that, as a young woman, she served a stint as a Playboy Bunny. Here are some more tantalizing facts the feminist icon, including her discovery, through Little Women, that “women could be a whole human world.”

But writer Ellen Gutoskey saved the best for last:

“15. GLORIA STEINEM HAS NO PLANS TO RETIRE.”

“After I was injured in a school shooting, I found unexpected comfort in binging grisly TV shows and podcasts. And I’m not the only one.”

Taylor Schumann reports that, after being wounded in a school shooting, she began obsessively watching true crime TV shows because “at their root was reality: real people and real pain, just like my own.”

Later, discussing true crime shows and podcasts, she was comforted by the realization that she wasn’t the only person fascinated by them. And those discussions often offered her the opportunity to share bits of her own experience, with the result that “I felt more known.” Finally, “I found an unexpected community of other victims of violent crime who also experienced a sort of mending of themselves through the true crime genre.”

Jon Friedman writes for Esquire about Neil Young’s song “Ohio,” written 50 years ago this summer “in the aftermath of the massacre of four students on the campus of Kent State University, on May 4, 1970.”

This moment in history has special poignancy for me because my graduation from Boston University, scheduled for late May, was canceled immediately after the killings. We were in the middle of the final exam period, and all exams not yet taken were called off. We were also made to leave the dormitories within the next few days.

And that experience made me sympathize with all the students who missed out on their high school, college, or graduate school graduations this year, the spring and summer of COVID-19.

And I wonder what kind of music will emerge from our current experience. Will there be anything as lastingly significant as Neil Young’s song “Ohio”?

“Today, of course,” writes Friedman, “Young is defined by his lifelong activism, but in early 1970, before the release of ‘Ohio,’ there was no real indication of the protest singer he was about to become.”

Darn, I miss baseball. Everything at all baseball related reminds me how much.

In Praise of Solitude

Academician Irina Dumitrescu riffs on the notion of solitude. The main bases for her musings are the new book The Art of Solitude by Stephen Batchelor and the curious isolation the COVID-19 virus has forced upon us:

Zoom and Skype and Instagram live beam faces and voices into our rooms, but we miss touch and scent of skin, the warmth of another’s body, the easy energy of a conversation in place. We are neither with one another nor alone with ourselves, neither imprisoned nor truly free.

As the virus surges, I hope all of you are keeping yourselves healthy, both physically and mentally. Take time to engage in whatever activities bring you comfort and joy. And do not feel the need to apologize for self-care.

No matter how many times his teammates said it, Kyle Schwarber had a hard time believing it. Through all the hours of rehab, all the months spent away from the field, the rest of the Chicago Cubs kept telling him he would be back for the World Series.

I’ve always been a baseball fan, and I’ve had three favorite teams in my lifetime: the Boston Red Sox, the St. Louis Cardinals, and the Seattle Mariners. Since none of my favorite teams is in the World Series, I’m able to enjoy the pure spectacle.

But Kyle Schwarber’s story is one that should please everybody, regardless of where one’s baseball heart lies.

Thursday is again upon us. Time for another entry of Three Things Thursday, the purpose of which is to “share three things from the previous week that made you smile or laugh or appreciate the awesome of your life.”

Two or three months ago Tacoma Metro Park District put out a notice that they were thinking of starting a singing group for their 50 and Over activities program. I was in one community chorus or another for several years back in St. Louis. After moving to Tacoma I had looked around casually for a singing group but didn’t find anything in my league. What I mean by that is: if the group requires an audition, it’s out of my league.

I finally got word that there was enough interest in the Park District’s group that they were moving ahead. I attended my first meeting on Monday. There were about seven people there, plus two employees of the Park District. One of the women had brought some printouts of popular old songs such as Let Me Call You Sweetheart and Mr. Sandman. We sang through a few of those songs, without accompaniment. There is no money in the budget to hire someone to play the piano, but there may be a possibility of finding a volunteer.

The choruses that I participated in before sang in four-part harmony accompanied by an accomplished pianist. We prepared real music such as Handel’s Messiah, Vivaldi’s Gloria, and an assortment of popular tunes, and we performed twice a year. Therefore, what I found on Monday isn’t exactly what I was expecting. But I’ll give it a few more weeks to develop. As the group’s existence gets publicized more widely, maybe more people will show up and a more formal structure will develop. I don’t play to stay if it remains just a few people getting together once a week to sing old songs without any accompaniment, not even a pitch pipe.

But the experience did remind me how much I enjoyed participating in a community chorus. I should probably start looking again, more seriously this time, for one that’s appropriate for my level.

Return of the Writing Mojo

I’ve been having a hard time with my writing lately. I’ve been at it long enough to know that the creative process ebbs and flows, and a writer has to be prepared to soldier on when the going gets tough and trust that the mojo will return. I’ve been gritting my teeth and continuing to type, even though only pretty pedestrian prose was showing up on my computer screen.

But a couple of days ago, the mojo finally returned. It always shows up in the same way: I wake up at about 4:00 AM just full of ideas. Then, whole passages of perfect prose begin to form themselves inside my head. In the past I’ve told myself that those passages would still be in my head later, then turned over and gone back to sleep. But I’ve learned that the passages will, in fact, not be there later, and I’d better get up right away and write them down before they evaporate.

It’s my favorite time of the year: baseball playoff season.

My beloved St. Louis Cardinals had the best record in baseball this season, so they should be in the World Series, right?

Wrong. They came up against their archrivals, the Chicago Cubs, who won the wild card spot. The Cardinals and the Cubs have been playing since 1898, so this rivalry has had lots of time to fester. In a short series, any team might be able to beat any other team. That’s what happened in the best-of-five division series: The Cubs beat the Cardinals. And that’s why they play the games instead of just figuring the whole thing out on paper.

But in the next round, which is a best-of-seven series, the New York Mets swept the Cubs to win the National League pennant. I find some consolation in that, but not much.

The World Series is an anxious time if your team is playing. But when, like this year for me, your team is not there, the Series takes on a kind of Zen aura. Then I can appreciate the game for its own sake. There’s a purity in being a disinterested observer watching the game unfold, a purity unsullied by the ecstasy of victory or the agony of defeat. Such a moment elevates my appreciation of the essence of the game.

And of course I’m only writing all that purple prose because this year, my team won’t be there. 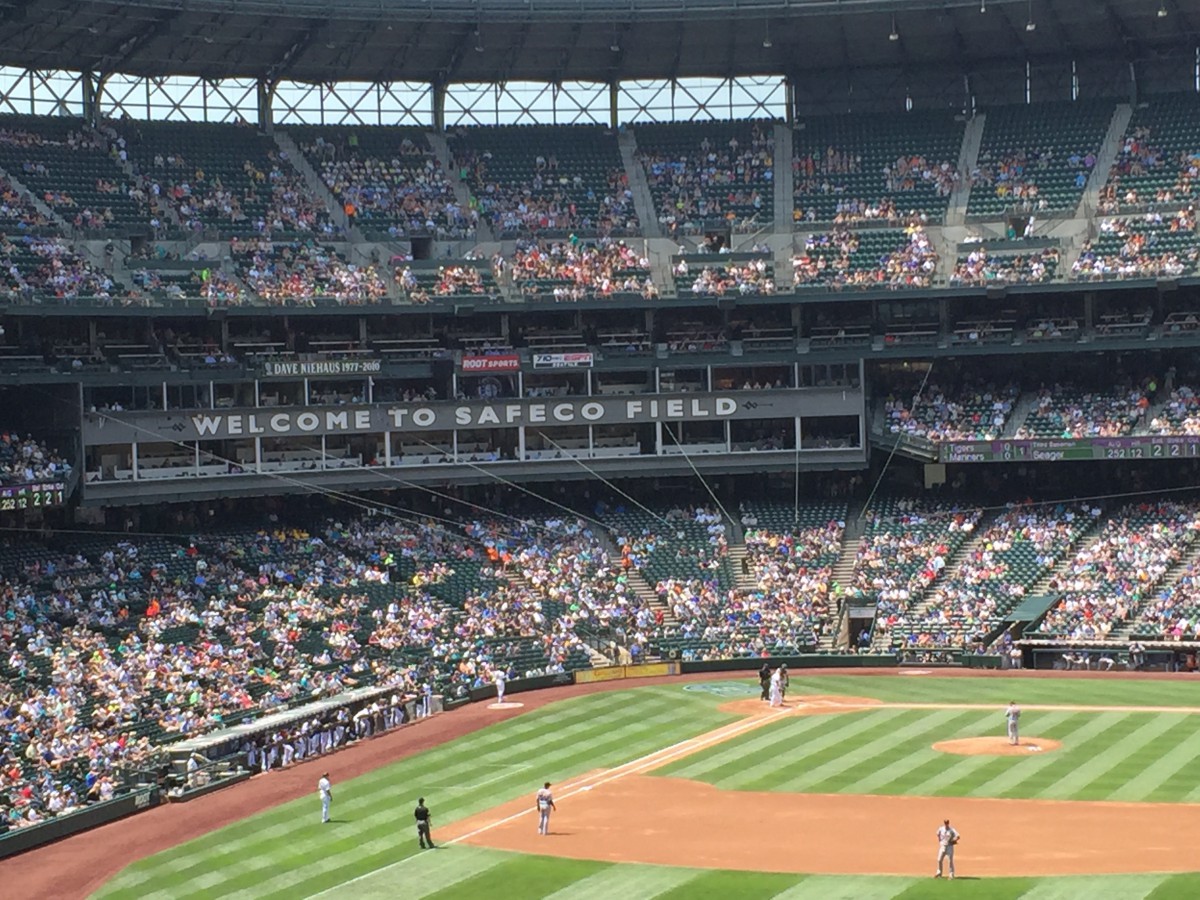 Here’s this week’s installment of Three Things Thursday, the purpose of which is to “share three things from the previous week that made you smile or laugh or appreciate the awesome of your life.”

And awesome my life was yesterday, when a group of us from Franke Tobey Jones went up to Safeco Field for a day game between the Seattle Mariners and the Detroit Tigers. We sat in the Hit It Here Cafe, which is a covered area just above the right field wall.

Safeco Field is a beautiful stadium that officially opened on July 15, 1999. I especially like this sign along the third base side of the field:

The Mariners had runners on 1st and 2nd in the opening inning but didn’t manage to score:

3. Cleaning up the Infield

The grounds crew rushes out for a quick clean-up job on the base paths just before the start of the 7th inning:

It was just about a perfect day for baseball. We were all glad that we had chosen the seats in the covered cafe, as people on the lower levels were in direct sun. The temperature was in the low 80s, but as always up here, it felt much cooler than that as long as you were in the shade.

We even had a bit of added excitement during the game: a fan ran onto the field. He was quickly tackled by security personnel and escorted off the field. He spent at least a few hours in jail and will pay a hefty fine. This guy wasn’t a streaker because he had pants on. I don’t know if you get fined extra for running naked onto the field.

The only thing that kept the day from being perfect was the Mariners’ 5–4 loss to the Tigers.